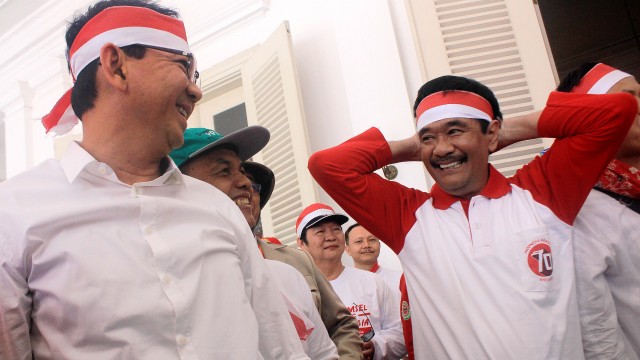 Jakarta. Basuki Tjahaja Purnama’s decision to run independently in next year’s Jakarta election has been welcomed by experts, who see it as a potential test for political parties in the selection of a competitive candidate against the incumbent.

Basuki announced he will run as an independent on Monday, choosing senior city official Heru Budihartono as his running mate instead of his current deputy Djarot Saiful Hidayat of the Indonesian Democratic Party of Struggle (PDI-P).

Agung Wasono, the executive director of Institute for Economics Politics and Public Policy Analysis (Lanskap), on Tuesday (08/03) said Basuki’s independent run could be a test of the political parties’ effectiveness in endorsing candidate pairs.

He said Basuki will represent the spirit and philosophy of an independent candidate pair — running counter to the political parties oligarchy in recruiting potential leaders.

“If Ahok win this election, it could be a moment to evaluate the roles of political party,” Agung told to Jakarta Globe, referring to the governor by his popular name.

The National Democratic Party has said that it will continue to support Basuki in his reelection bid despite him running as an independent.

“It is actually an anomaly to see political parties wanting to endorse an independent candidate pair,” said Agung.

Basuki chose Heri as his running mate since the city’s Agency for Finance and Assets Management (BPKAD) Chairman has bravely supported transparency in the provincial budget planning and use, indicating his anti-corruption attitude.

Basuki’s independent run was firstly supported by Teman Ahok, or Friends of Ahok, a grass-roots volunteer initiative to support the incumbent’s independent candidacies.

For months, the group of volunteers have worked on a campaign, aimed at collecting signatures and copies of identity cards from a million Jakarta residents. By law, an independent candidate must obtain the signed support of 7.5 percent of registered voters in order to be eligible to run for office.

In Jakarta, the threshold is 525,000 — Teman Ahok had already garnered 730,000 pledges of support, and the group says it is still gunning for the one million mark.

In the 2012 Jakarta election, Basuki was selected as deputy governor with running mate Joko Widodo as a governor. Basuki was given the governor seat two years later, after Joko won the presidential election.**

Original Source from The Jakarta Globe.